Pianist/Composer Michael Jefry Stevens received his Masters of Arts degree in Jazz performance and composition from Queens College (CUNY) in 1992 and was a member of the BMI Jazz Composer’s Workshop from 1995 – 1998. He was the Margaret Lee Crofts Fellow at “The MacDowell Colony” in the summer of 2000, received 2nd prize in the prestigious Monaco International Jazz Composition in 1998, and was a composer fellow at the Centrum Arts Colony in Port Townsend, WA in June 2005.  In 2009 Mr. Stevens was named a “Steinway” Performing Artist (the first ever for the City of Memphis). Mr. Stevens has taught at Rhodes College in Memphis, Five Towns College in Dix Hills, NY, was Keyboard instructor at the National Guitar Summer Workshop for 10 years (1990 – 2000) and is currently artist-in-residence every summer at the jazz workshop at Educacion Musicale in La Plata, Argentina. He has been on the performing artist roster of the Virginia Museum of Fine Arts since 1998 international music. He is a member of the IASJ (International Association of Schools of Jazz), ISIM (International Society of Improvised Music), JEN (Jazz Educators Network) and GEMA (German performing arts society).

To date Michael has released over 75 albums and composed over 400 works for various ensembles, including big band, string quartet, music for voice, music for solo instruments and various small group compositions. He continues to tour and perform internationally in Europe, Latin America and North America.  Recent master classes include teaching residencies in Mexico, Finland (Sibelius Academy), Germany and USA (University of Michigan).

Michael says: “During the thirty years I have been teaching children of all ages, teenagers through post graduate students and retirees, I have developed a teaching philosophy. I function as a guide for the student, enabling each individual to follow his or her unique musical path, in order to develop to his or her distinctive voice. As Arnold Schoenberg states in his Theory of Music, “This book I have learned from my pupils.” While everyone needs to study technique, theory, and repertoire, I am equally interested in assisting each student to pursue his or her individual musical and extra-musical interests. My expertise, honed during forty years of playing and composing, is in modern jazz improvisation, repertoire, theory, composition, and ensemble performance. I act as a guide for my students in supporting, encouraging, and guiding them. Lessons are intensive and normally occur on a bi-weekly basis.

"Michael is one of the most generous teachers I’ve ever had: generous with his incredible musicality and knowledge, generous with his time, and generous with his heart. Each lesson in his [then Brooklyn] apartment was a deep dive into the world of jazz – a world that had been mysterious to me, especially technically as a pianist. Michael unlocked that door without judgement, filling years of my notebooks with scales and chord progressions, choosing pieces to inspire me and help me grow, and letting lessons go overtime as he’d introduce me to jazz artists via his amazing wall of CDs or at the piano. He’d sometimes even share his own compositions with me, which always made me feel special. Making you feel special is what Michael is all about – he really hears you, supports you musically where you’re at, and takes you to the next place. That rare, real-deal encouragement has stayed with me until today, in my songwriting and in my teaching – now with my own students I aspire to pass on the musical energy and support that Michael gave so open-heartedly to me. Thank you, Michael!"

“I have known Michael for more than ten years as a musician, performer, and educator.  We first met when he came to Aarhus to work with our students at the Musikkonservatorium in 1998. His program was so successful that we were very pleased when he was able to return on a number of occasions to teach clinics and conduct concerts with our students.

I have observed Michael to be a very creative, prolific, and innovative artist who has a charismatic way of sharing his enthusiasm for jazz with students and audiences from diverse populations. He has an insightful way of recognizing the individual strengths of his musicians, and creating opportunities for them to reach their highest level of performance.”

“Michael is a consummate musician. Michael has a superb ability to offer highly practical advice as well as deal with more philosophical, aesthetic issues that are also important to aspiring (as well as of course established) artists. I also witnessed Michael’s teaching on several occasions in which he has coached combos consisting of some of the most talented young musicians in the world. Students in his groups have regularly raved about his teaching.”

Edward W. Sarath, Professor of Music
The University of Michigan

“Having taught with Michael in several clinic situations over the past 20 years, as well as asked my share of musical questions of him as well, I can absolutely state that Michael is a master teacher and communicator of music thought.  He is always able to project his intensive melodic lyricism in both his soloing and his compositions.  I highly recommend Michael with the greatest enthusiasm to any artistic, musical or educational situation.”

“Michael is a consummate musician. He is a great jazz improviser and a wonderful composer and orchestrator.  He is knowledgeable and well organized. Michael has a warm personality and is easy to work with.  He is a natural teacher who takes a genuine interest in his students.”

“So I wanted to thank you for all the lessons we did and all that you taught/showed me.
It was great to play and feel confident about what I was doing.  I’ve been practicing the things
you showed me and was able to hold my own while jamming with Ron McClure.
And we took some of those tunes (Coltrane’s Lazybird for one) at break neck speed even though
I wanted to go a little slower.  But it all went well.  Because of the nature of the gig
I’m getting a chance to stretch out soloing and comping behind Ron’s solos.
And it was a blast.  So thanks again for everything.”

“Happy birthday to one of my favorite musicians/teachers I’ve had the pleasure of knowing.”

“You are still the teacher that I compare all other teachers to. You are also the teacher that I try to be the most like. I can’t thank you enough for all that you’ve given me. You told me when I was fifteen that I would be lucky if I could in years later say that I had studied with three good teachers. You were right. I learned the fastest with you.  No other teacher has been able to duplicate this for me. If I had trouble understanding or playing something, you immediately knew the hang up, and you knew the right solution. I’ll be damned if I wasn’t cured by the end of the hour. I became a composer after you taught me how to write my ideas down. I told you at the end of that summer that I was going to give my life to this thing and that I was going find a way into a conservatory.  I did find a way into New England Conservatory and it couldn’t have been done without you.”

“Back to having lots of students. Had one very very high maintenance father who quizzed me on my “method” while he was interviewing me for his daughter. And it was good for me to define my “method” which is such a combination of things, including of course lots of Michael Jefry Stevens inspiration!!!”

“How wonderful to hear from you. You’ve built the foundation of my Jazz knowledge. Many thanks to that.”

“Hands-down coolest person I’ve ever had the pleasure of knowing & learning from back when I was a freshman.” 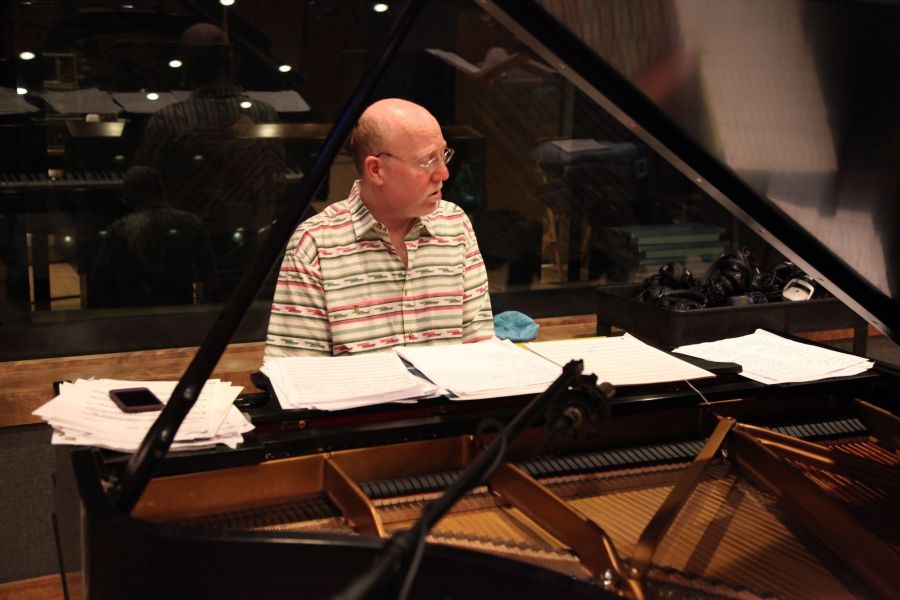